At the February 18, Corporate Services Committee, the following recommendations will be brought forward in consent items, as city staff request that the following actions be taken:

a) the City owned lands, shown on Appendix “A”, BE DECLARED surplus;

b) the City owned lands (“Surplus Lands”) BE DISPOSED OF in compliance with the City’s Sale and Other Disposition of Land Policy via a tender process;

c) the Civic Administration BE DIRECTED to undertake a tender process for the “Surplus Lands” for the purposes of redevelopment and the adaptive reuse of the Health Services Building and the 1922 portion of the War Memorial Children’s Hospital; and

d) the Civic Administration BE DIRECTED to undertake a City initiated Zoning By-law amendment consistent with the policies of the Old Victoria Lands Secondary Plan.

Those interested in learning more about the process and recommendation should consult the full report for further background, context, and details.

From Appendix A (lands to be declared surplus): 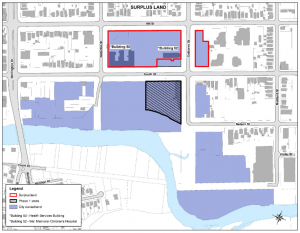 The zoning for the Old Victoria Hospital Lands Secondary Plan currently looks like this (see Appendix B in the report): 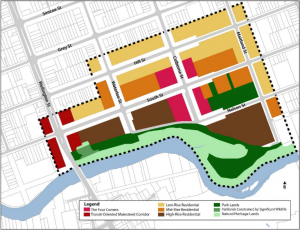