History is in the making all around us in the wake of the COVID-19 epidemic. From Sir Frederick Banting’s discovery of insulin to the Canadian Medical Hall of Fame, London is renowned around the world as a city of great medical achievements. One of the ways our community shares in stories about London’s healthcare history is through the Hear, Here project. Hear, Here collects oral histories from London’s citizens and connects them to important places throughout the city. SoHo is home to over 50 Hear, Here stories – I’m sure you’ve even encountered some of their distinct orange street signs during neighbourhood strolls! 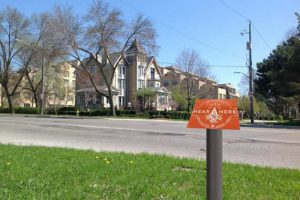 Our community, like many others across Canada, is starting to come to terms with the rapid change in everyday life since the start of the COVID-19 pandemic. Sometimes we can lose sight of our connection to one another as Londoners, which is why we wanted to share uplifting stories about learning, healing, and helping one another. SoHo is also home to important historic landmarks in London’s healthcare history, including South Street and Old Victoria Hospitals. To reflect upon positive healthcare stories, Hear, Here has created a special social media series for you to discover SoHo’s rich history!

“I can remember as a kid, living in or situated in our living room on a Sunday morning, the Salvation Army band used to pull up with its horns, its tubas and we could hear the sound of the band. The band used to set up outside the War Memorial Children’s Hospital across the road… they would play those songs and we would hear them frequently right into our living room on Colborne Street. Never seen the kids, but they would be at the windows… It was just the sound of those horns on a Sunday morning in the neighbourhood”.

“I entered training at South Street Hospital in September of 1959. I was in training three years. Training was hard, I remember my obstetric training I was put in a room with a lady who was in labour and I had absolutely no idea what was going on because I had had no classes. But they just put you in the room and shut the door. [laughs] And you learned as you went”.

“My memory for the War Memorial Hospital was more when I was a grad, of bringing all the kids over for their tonsillectomy. And [the] chain of stretchers coming from War Memorial through the tunnel and up to the operating room. You know, it wouldn’t be uncommon to have four or five stretchers being pulled along, one pushing one pulling. In those days it was very common for maybe ten to fifteen tonsillectomies in a day, so you’d be looking after them in the recovery room, and then you’d have to wheel them all the way back over to Children’s. Traveling time might have been half an hour by the time you get them back into their rooms. In that cold tunnel”.

“We lived in the residence… The rooms in the residence were either single rooms or two bedrooms. There were little kitchenettes on each floor, the cafeteria was in the basement and we got all our meals at the cafeteria. The classrooms were in the basement, there was a large auditorium in the basement and every Wednesday night there was a dance. And that’s where I met my husband. He just asked me to dance. We all used to say that the best ones were picked before Christmastime, after that it was if you hadn’t picked someone before Christmas you probably weren’t going to find anybody you wanted to pick, and I met him in November. The rest is history”.

“When we started Medical School in 1958, there were approximately 60 of us in the class, and 6 women… Now, just that year they had a new assistant professor, who was a very accomplished man from Austria, his name was von Hostetter. We referred to him as the Baron, whether he was or not, I don’t know. But he was so amazing, he would draw the anatomy that he was teaching about with two hands in different coloured chalks. One of the things I remember that was most beautiful was when you came to the dissection of the heart, and of course you had to remove it from the body, and he did this very carefully and, on one of the bodies, and held it out and it was with such awe and reverence. I never forgot that image”.

If you’d like to discover more SoHo stories, check out the Hear, Here website and download the Driftscape app to listen to storyteller’s personal accounts and visit these historic landmarks in person!